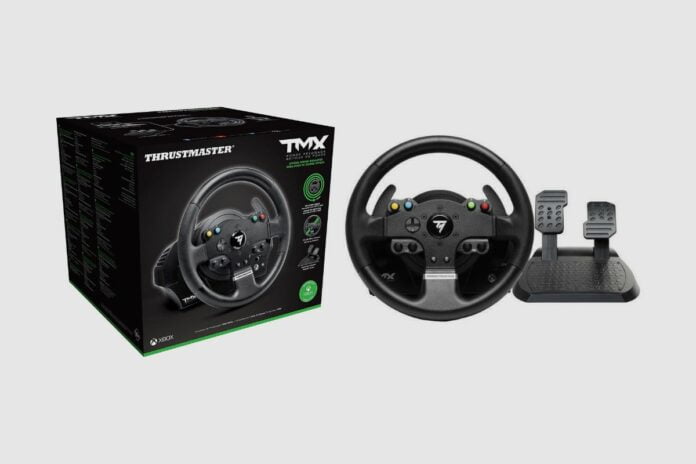 In the family of Thrustmaster race gaming wheels family, the TMX is the budget racing wheel as it is relatively cheaper and affords users a grand race gaming experience. However, the question is whether the TMX is worth the money, as it is not the highest-end racing wheel in the series.

In the article, I will be answering some of the common questions about the Thrustmaster TMX for you to make an informed decision if you decide to buy one.

The Thrustmaster TMX racing wheel comes with a lot of specifications. It comes with an 11 inches (28 cm) ergonomic rubber wheel that can perform an adjustable 270-900 degrees rotation angle (it is suitable for all types of racing games). It has embedded software that ensures that it is automatically recognised and that all its buttons and menu options work; it has 12 action buttons and a directional pad.

It also has two 5 inches (13 cm) tall, 100-per cent wheel-mounted sequential paddle shifters. There are also two pedals with a wide footrest, an adjustable inclination angle, and progressive resistance for the brake pedal.  The drive system comes with an adjustable force feedback system that lets you feel details like the road or track relief, loss of tire grip, braking, bumps and impacts while racing.

You also enjoy precise controls with a 12-bit resolution optical reading for 4096 values on the wheel’s steering axis. There is also a mixed belt-pulley and gears system with a metal ball-bearing axle for smoother and quieter operation. You also enjoy a robust and versatile attachment system with internal memory and upgradeable firmware.

A great feature is that it is compatible with all mounts (desk, tables etc.)

Is the Thrustmaster TMX Suitable for F1 games?

It has to be pointed out that the F1 2021 has a bug that causes the Thrustmaster wheels to sometimes have no force feedback, even though the wheel works normally. This happens when the game loses focus. You would have to click the mouse or cursor to bring the game into focus. You can also disconnect and reconnect the wheel.

Does the Thrustmaster TMX have Force Feedback?

The force feedback is a simulation technique used in racing wheels to deliver a true-life representation of actual real-life racing.

The Thrustmaster TMX has a 900 degrees adjustable force feedback base, allowing you to feel every detail while racing. These details include road or track relief, loss of tire grip, braking, bumps, impacts and many more.

Is the Thrustmaster TMX Worth Buying?

If you are really into racing games and you are after experiencing the actual simulation, then you should consider getting the Thrustmaster TMX. It gives you that real-life racing experience and comes at a low cost compared to alternatives. It is suitable for all Xbox consoles. And it is also compatible with a  Personal Computer (PC).

Does the Thrustmaster TMX work on PS4?

Is the Thrustmaster TMX  a Good Gaming Wheel?

When you consider the relative cost of the Thrustmaster TMX, it is a good gaming wheel. Overall, it is a mid-range racing wheel as it affords you force feedback to get a feel of the actual racing experience.

On the force feedback strength, the Thrustmaster TMX is not as strong when compared to other racing wheels. But all in all, it is a good gaming wheel.

Is the Thrustmaster TMX Compatible with PC?

The Thrustmaster TMX is compatible with a personal computer (PC). You might need to download and install the Thrustmaster drivers to enable the gaming wheel to work with your own PC.

The Thrustmaster TMX  vs the Logitech G920 gaming driving wheel

Generally, the Logitech G920 has a better feeling hand and affords you a grander gaming experience.

How to turn off the force feedback of the Thrustmaster TMX?

Product Image Gallery – Is the Thrustmaster TMX worth it?