PS4 Ultimate Player Edition VS PS4 Pro: Which is Better? 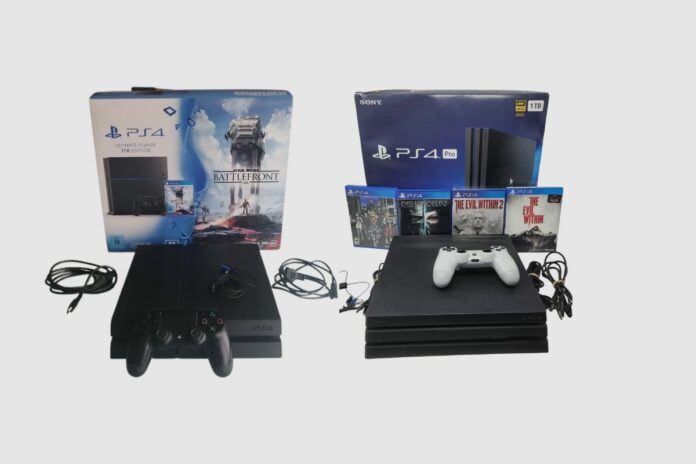 However, just one year later, Sony announced the release of the PS4 Pro, which is supposed to be a more powerful version of the model they released in 2015. It is also the first PS4 to be able to take advantage of the 4K resolution and produce way better graphics. So, in this article, I will be trying to end the age-old argument: which is better: the PS4 Ultimate Player Edition or the PS4 Pro?

Related Post: Is it Worth Getting a PS4 Pro?

What Are the Main Differences Between the PS4 Ultimate Player Edition and the PS4 Pro?

The differences between the PS4 Ultimate Player Edition and the PS4 Pro are like night and day. There are two very different consoles, and the PS4 Pro is definitely the more powerful console, as well as the better-looking of the two consoles. However, they do share one similarity, and that is in their storage; both consoles come with a 1 TB hard drive.

In terms of appearance, the PS4 Ultimate looks exactly like the base model PS4, with only 2 slight changes in its design. That would be a change in the shade of the paint used to cover the hard drive. It used to be this glossy black colour, but thankfully, Sony changed it to match the matte black finish on the whole console. They also made the Ultimate Player Edition 10% lighter than the original model.

However, when compared to the PS4 Pro, the difference is very clear. The Pro is 5% larger than the original PS4 and the ultimate edition. It is also 5% heavier. Sony has also moved the silver PlayStation logo from the bottom of the console to the middle of it and made it matte black.

The PS4 Pro also has a third layer on top of it, which sort of makes it look like a ladder, but I think it is cool. PlayStation also made the great choice of keeping the PS4 Pro matte black, and as MKBHD said, everything is always better in matte black. Sony has also added an extra USB 3.1 port at the back as well as changed the HDMI port to an HDMI 2.1 port to make room for the 4K video upgrades it comes with.

Sony has also made a slight tweak to their DualShock 4 controllers by adding a light bar to the touchpad, and there aren’t a lot of big differences between the PS4 and the Pro controllers. However, the new controller does away with the shiny surface around the D-Pad’s face and buttons. The D-pad buttons are now matte grey instead of a shiny black, but aside from that, the controllers still feel almost the same as the older models, and they also have the same firm grips as well as the same raised texture along the back and sides.

From the internals of the PS4 and PS4 Pro, I was able to spot a few differences between the two of them. Again, Sony chose to tweak the PS4 instead of making a full overhaul of the internals for the PS4 Pro. The PS4 Pro was built on the same AMD processor as the original PS4, but as I had said before, they did manage to tweak the PS4 Pro’s processor a little bit. So, they were able to overclock the processor to 2.1GHz as opposed to the PS4’s 1.6GHz.

The Pro also has a beefed-up memory bandwidth to get even better performance levels. However, there have been a few changes to the GPU that allow it to hit that supreme 4K display performance. Although it still has the same eight cores as the base model, it still integrates a lot of the features from AMD’s new Polaris architecture.

This raises the TFLOPs from 1.84 to 4.2, which more than doubles the power of the Pro when compared to the slim or PS4. The Wi-Fi has seen a boost in performance as well as the Bluetooth going from v2.1 to v4.0. The Pro also has an extra 1GB of DDR3 RAM that is used for non-gaming apps to allow the DDR5 RAM to become faster for gaming.

Which is More Powerful?

In terms of raw power, the PS4 Pro clearly outclasses the PS4 in a lot of ways. As I stated previously, the PS4 Pro has a max performance of 4.2 TFLOPs instead of the 1.84 TFLOPs that the PS4 comes with. In terms of performance, the PS4 Pro’s ability to render games at 4K should not be understated, as this is where the PS4 Pro shines and puts all that power to good use. Older games get a major boost in performance once paired with a 4K TV, and this is majorly due to the use of upscaling technology to produce native 4K boosts.

Games like Uncharted 3 get a major boost in graphical fidelity, particle effects fly off the screen, and contrast ratios are through the roof. However, it is a good point to note that not all games, out of the gate, have native 4K resolutions. However, many of them support 4K Pro mode, which upscales performance and boosts graphical fidelity, and it all shines on a 4K TV.

Which has better graphics?

Without a doubt, the PS4 Pro has the best graphics of the two. Even if you don’t have a 4KTV, the PS4 Pro is still able to scale down its 4K output to produce sharper and crisper 1080p images, and it doesn’t stop there. The PS4 Pro can support high-fidelity 4K gaming on a 4K TV with outstanding results.

When the Pro was initially launched, it was able to render games at varying levels of quality, with games like Watch Dogs 2 having exceptionally impressive graphics. I was able to notice the wear and tear on a nearby wall, and I could even see every knitted detail of the hipsterish fox sweater I was wearing in the game. However, even with boost mode enabled, some games, such as Deus Ex: Mankind Divided, had patchy 4K performance. The frame rates weren’t stable on 4K, and the graphical fidelity took a slight hit when in performance mode.

However, that is no longer the case. The PS4 Pro can render a lot of games at great frame rates with very impressive graphics. Games like God of War 2018 and Horizon Forbidden West are all great examples of amazing games that have incredible graphics on the PS4 Pro. If you don’t believe me, just compare Horizon Forbidden West on the PS4 Pro against the base model PS4, and you should be able to see the difference very clearly.

The graphics even begin to go through the roof when you pair it with an HDR-capable TV. At this point, it is not even a competition between the PS4 Pro and the Ultimate Player Edition. All of the graphical boosts that the PS4 Pro can produce put it well and truly over the PS4 Pro.

What Are the Main Advantages of Playing with a PS4 Ultimate Player Edition?

The PS4 Ultimate Player Edition is a solid console, but it is still just a base-level PS4 with a boost in its memory storage. However, it does have some advantages to it.

What Are the Main Advantages of Playing with a PS4 Pro?

The PS4 Pro should be considered one of the premiere ways of playing games in 4K on a PS4 console. Here are some of the advantages of gaming on a PS4 Pro.

Which Console is More Expensive?

The PS4 Pro is still the more expensive of the two. I found the PS4 Pro on Amazon for $400, but I couldn’t find the PS4 Ultimate Player Edition on Amazon or even Walmart. I finally found it on eBay for about $200, and I also found a fairly used one from a friend for $150. This is mostly because the PS5 is out, and the PS4 Ultimate Player Edition is a limited-edition console, so there weren’t as many released.

Which Console Do You Think is Better to Buy?

The PS4 Pro is a testament to the good work done by the guys at Sony. The kind of power they were able to get out of the console by just making some important tweaks to the base model PS4 is very impressive. I think the PS4 Ultimate Player Edition is a very good console to have. I don’t think it is worth getting, especially if you already have a PS4. I hope you found this article helpful, and if you have any questions, please let me know how I can help out in the comments section.

Is the Fanatec Porsche 911 GT2 Racing Wheel Worth Buying? Discover...