Ratchet and Clank Rift Apart Game Review: Discover the Pros and Cons of the Game

Is The Ratchet and Clank Rift Apart Game Worth Buying?

Ratchet and Clank Rift Apart is a third-person Intergalactic-Adventure game developed by Insomniac Games and published Exclusively for PlayStation 5 by Sony Interactive Entertainment. This game is one of the best games you will play on the PlayStation 5 today, from its gameplay to mechanics and visuals.

This new instalment of the Ratchet and Clank series, which started on November 4, 2002, features the adored and main characters of the video game; Ratchet, the alien, and his sidekick robot, Clank, as they navigate across the galaxy battling different evil Lords. Most especially Dr Nefarious who wants to take control of the universe, and his strategy is to split Ratchet and Clank from one another.

Ratchet and Clank Rift Apart Game is the sixteenth instalment of the game series and was released on the 11th of June 2021. Although the video game shares similarities with its 2016 predecessor – Ratchet & Clank, it is still the most addictive and impressive game in the series so far. 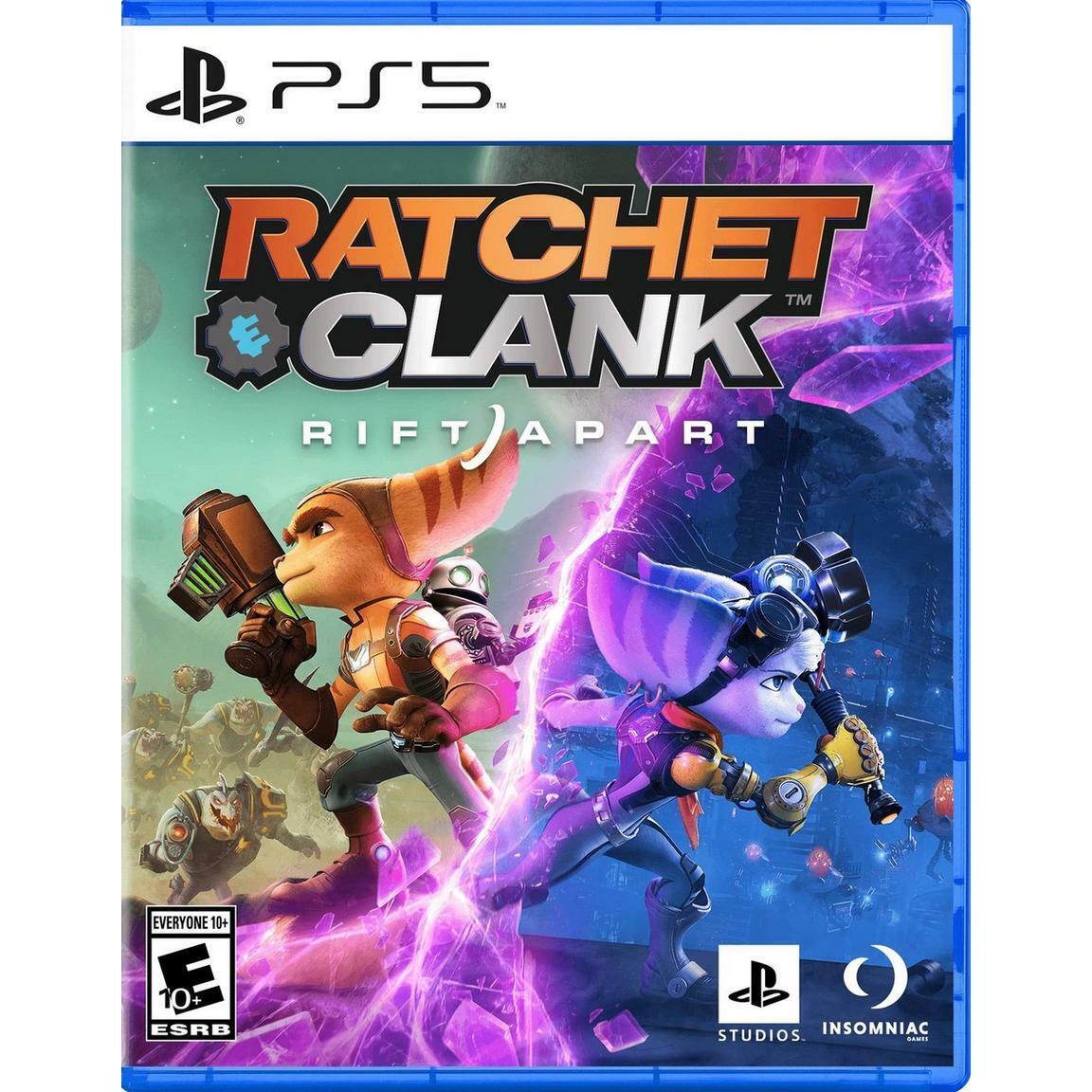 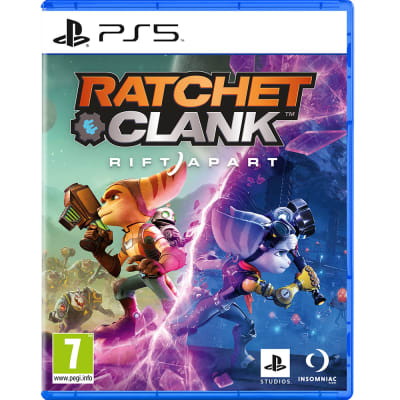 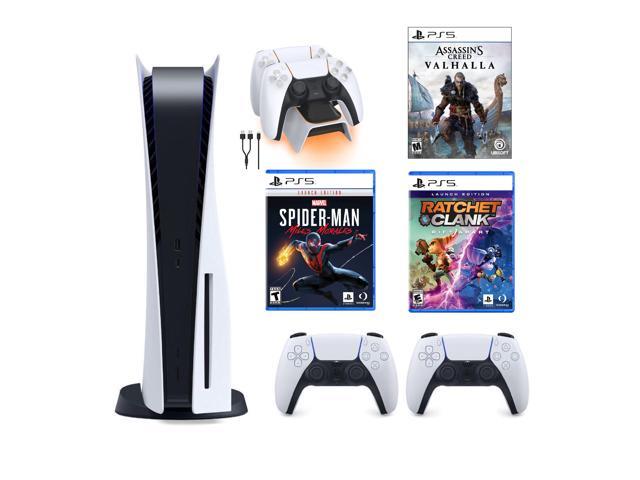 At the celebration parade in honour of Ratchet and Clank as galactic heroes, Clank reveals to have fixed the device known as Dimensionator (used for the opening rift to other dimensions) to assist Ratchet looking for his missing family and alien-kinds known as Lombax but before they know it they were under attack by Dr Nefarious who is attempting to get away with the device. However, as Ratchet was dragging the device with Dr Nefarious, he mistakenly triggered the Dimensionator, leading to the opening up of the dimensional rifts, which transport them to a proxy universe before exploding and destroying space and time structure, separating all three.

A while later, Clank woke up to find himself alone with a broken arm from the explosion. The robot is later seen and rescued by a Lombax called Rivet. And Ratchet was alone as well and set out in search for his partner, Clank While on the other hand, Dr Nefarious found himself in a throne room, where he was mistaken for an alternate version of himself known as Emperor Nefarious, who has never lost a battle in his dimension.

Since the Emperor was already away for a mission, Dr Nefarious took over his identity and sent his acquired soldiers after Ratchet and Rivet. Ratchet saw Rivet leaving the dimension with Clank, followed after her with the help of Glitch, an electronic helper gifted to him by Phantom (a resistance soldier against Emperor Nefarious). Rivet brought Clank to her shelter to investigate an anomaly, making contact with Gary, a prophet, who engaged him to repair the anomalies in the dimension to avert Dimensional Cataclysm. Rivet assisted Clank to contact Ratchet by fixing his communicator, and they all plan on how to reconstruct the Dimensionator for them to go back to their dimension and resolve the Dimensional Cataclysm.

The game continues with Ratchet searching for the blueprint used for building the Dimensionator after engaging the help of Gary’s robot, Kit, as a partner but not before warning Ratchet that she was created by Emperor Nefarious and could lose control and attack him. After Ratchet reassures Kit they make a great team, they both leave for the secret Lab to build a new Device while Rivet and Clank on the other hand went to get the Phase Quartz needed to power up the Dimensionator but was damaged accidentally. With this new development, they both set out in search of the Legendary fixer who repaired the Phase Quartz.

Ratchet and Rivet met with Clank reuniting back with his partner and Kit partnering up on Rivet. They finished up constructing the Dimensionator, but before they could use it, Dr Nefarious showed up but was defeated but Emperor Nefarious also appeared, defeating the Ratchet and Rivet easily and carting away with the dimensioner to use against Captain Quantum and the resistance.

In an attempt to retrieve the dimensioner, Rivet chased after the Emperor, who exiled her to a pocket dimension using the device. Ratchet tried to alert Captain Quantum but was already late as Emperor Nefarious exiled him. Celebrating his conquest, Emperor Nefarious feels unsatisfied and decides to dominate every dimension using the Dimensionator. Ratchet and Rivet, knowing the Emperor will be needing the Dimensional map, set out to stop him from getting a hold of the map. Rivet and Kit joined the Emperor’s ship to save Gary, who was revealed to have hidden the map in an anomaly. Ratchet and Clank were ambushed and exiled through the dimensional rift by the Emperor when they went to retrieve the map. Kit trying to stop the Emperor was also exiled through a rift. Alone, Rivet broke into the Emperor’s prison, where he held all his banished enemies to release them in a staged prison break.

However, Kit decided to leave the group because of the guilt of causing Rivet to lose her arm. While the group and the Resistance are re-assembling, the Emperor reveals his plan to attack Ratchet and Clanks dimension but before he could do anything, the group and the resistance chased him through the rift and destroyed his power suit. The kit came back to the scene holding the Emperor’s forces while Rivet, together with the group and Dr Nefarious, confronted and defeated the Emperor before exiling him through the rift. The Dimensionator is recovered and used to fix the dimensions and neutralise the Dimensional Cataclysm.

With the Dimensionator back in their possession and all the universe saved, the group (Ratchet, Clank, Rivet, and Kit) used the opportunity to rebuild the destruction caused by Emperor Nefarious, developing a new arm for Clank.

At the end of the gameplay, the residents of Nefarious city were pulling down the regime’s heritage. And Dr Nefarious reconnects with Lawrence and Gary sharing with his father all his discoveries in the adventure.

The clear graphics of the game can be attributed to the fact that the game was developed for next-gen hardware. The game visual effects are simply astonishing, with the set portraying the game story perfectly. With certainty, I can say that Ratchet & Clank: Rift Apart Game visuals is the most impressive of the game series on a console.

The music used in the Ratchet & Clank: Rift Apart game is an original composed by Mark Mothersbaugh, who combined various musical instruments and beat to create a beautiful sound experience that captures the idea behind the game story and blends perfectly.

There was no audio glitch at any time while playing the video game. And if any gamer should experience any technical audio issue, it would be from the audio output of the hardware being used.

Ratchet & Clank: Rift Apart game is a single-player game exclusively for PlayStation 5. The game is played from a third-person’s perspective navigating the main characters. The game includes features such as mechanised weapons, machine guns, a collection of bolts, high-tech gadgets, health upgrades and weapon enhancements. A new feature added in the Rift Apart game is the ability to play Rivet as a new character. Rivet is from another dimension and is of the same alien species (Lombax) as Ratchet.

Another feature introduced to this game is a Rift-Tether, for players to use to travel quickly between dimensions just with a pull. The game consists of other incredible characters and min-games that makes the adventure worthwhile.

In Ratchet & Clank: Rift Apart game, as players engage in battles, they interact with their environment. For example, Ratchet can move across high and low terrains to his advantage.

The Video games that are like the Ratchet & Clank: Rift Apart game are Kena Bridge of Spirits, Dog’s Run, Psychonauts, Crash Bandicoot 4: It’s About Time, Marvel’s Spider-Man: Miles Morales and Art’s Dream, just to mention a few of them.

Yes, believe me when I say Ratchet & Clank: Rift Apart is well worth the price when you finally have the chance to play the video game. It’s a total package of fun, adventure, and action combat.

Ratchet & Clank: Rift Apart is one game that delivers an incredible experience on next-gen consoles with a fast-loading time,  breathtaking combat, amazing visuals and responsive controls, and unforgettable characters. The game story is enthralling and, at the same time, easy enough for young gamers to understand.

If you are a fan of this game series but haven’t played the new release – Ratchet & Clank: Rift Apart game, you definitely are missing out on an exciting experience. And if you are new to the Ratchet & Clank series, I’m sure after reading this games review, you can ascertain you are missing out on a thrilling adventure, and no better time to join in the adventure than now.

October 16, 2022
Ratchet and Clank Rift Apart is a third-person Intergalactic-Adventure game developed by Insomniac Games and published Exclusively for PlayStation 5 by Sony Interactive Entertainment. This game is one of the best games you will play on the PlayStation 5 today, from its gameplay to...Ratchet and Clank Rift Apart Game Review: Discover the Pros and Cons of the Game
Facebook
Instagram
Pinterest
RSS
Twitter
Youtube

Life Is Strange True Colors Game Review: Is the Game Worth...