Is There a VR Headset for Xbox One X? 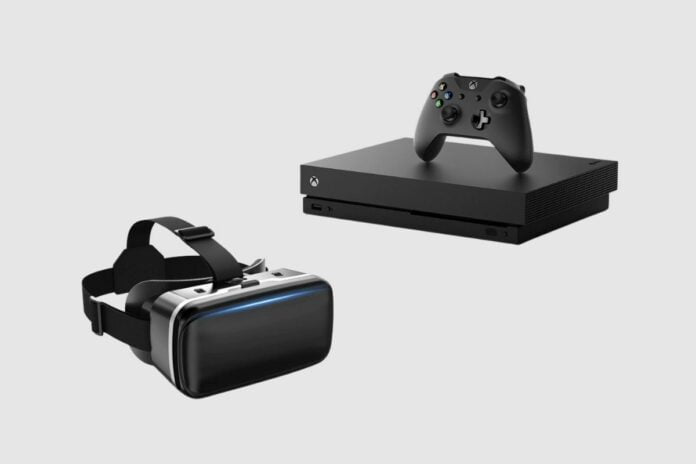 Currently, Xbox has kept their hands away from the VR world. They don’t make any games for it, and they don’t have an official headset for VR games, and that is understandable. The VR gaming world is mainly underutilised, and the games still look and feel janky.

Most people see VR gaming as an add-on experience rather than something worth the full price of admission.

While Meta and PlayStation have made significant strides in the VR gaming world, there is still a lack of a dedicated player base to propel the project from a gimmick to a fully-fledged gaming platform.

However, that hasn’t stopped some VR and Xbox enthusiasts from coming up with nifty and very novel ways of playing their favourite Xbox games in the VR world. So, in this article, I will be going through a few of the ways most gamers are hooking up their Xboxes to different VR setups.

Is There a VR Headset for Xbox One X

Xbox does not have an actual VR headset, and there is no VR Headset that Xbox has created that works natively with the Xbox One X. There are, however, a few VR headsets that will work on the Xbox One X with a few workarounds.

Some of the VR headsets that work on the Xbox One X are the PlayStation VR and Meta Quest two.

However, none of them works directly with the Xbox One X, so you’ll need to put together a few workarounds to get it working properly. Nevertheless, there will still be some drawbacks to playing with them, and you won’t even be able to get most of the games to work on the system.

There are several different ways to connect a VR headset to the Xbox One X. The easiest way to connect them is by using an Xbox game pass to set up your VR experience. The first thing you would need to do is sign into your Xbox game pass account on your laptop and then connect your VR Headset to your Laptop and engage the cinema mode from your settings.

This would allow your VR headset to mirror everything that your laptop is seeing and viewing then. Finally, all you have to do is connect your Xbox controller to your laptop using a Bluetooth connection and just like that, you are playing your Xbox games via your VR headset. This method should work on the systems like the Meta Quest two and the Rift VR headset.

You can also stream games direct into your Meta Quest 2 headset via the Xbox One streaming app, which you can download directly from the Meta store.

You can also play your Xbox one X games using your Meta Quest two by also signing into your Xbox game pass account. However, with this method, you won’t need to make use of a laptop to get it working.

All you have to do is connect your Meta Quest 2 to the internet using a WIFI connection or hotspot and then log in to your Xbox game pass account.

The only issue with this setup is that since there is no VR game on the Xbox game pass, you can’t play any of the actual games on the system, as the game pass does not recognise a Meta Quest controller as an Xbox controller.

Can I connect my PSVR Headset to my Xbox one X

The PSVR headset must then be set to projection mode in order to project whatever is connected to the optical drive to the headset. Then all you have to do is connect your Xbox controller and start playing your games.

What are the Best VR games on Xbox One X

However, there are a lot of normal games that you can play using a VR headset. Essentially all of the games you can play on your Xbox one X can be played in VR, so long as you use the steps I listed previously, then you should be able to play all of your games on the Xbox One X.

Although I do think some games really benefit from having what is essentially a very large screen in front of your face. A lot of E-sports titles like Madden and NBA 2k give you an extremely impressive viewing experience. Another game that shines when you play it using VR on your Xbox has to be Rocket League.

I personally love Rocket League, but when you play it on a VR headset, the experience is only improved, and I can see all the details since it is very close to me.

What are the Benefits of VR for Xbox One X

So now, when you play games in VR, you have an extremely large and clear screen. Another thing you would gain from playing games in VR has to be the incredible surround sound that would only seek to improve the listening experience for you, and it can also filter out external noise.

What are the Drawbacks of VR for Xbox One X?

I think all the workarounds really defeat the purpose of gaming on a console because Xbox hasn’t created their own VR headset. There aren’t any actual VR games you can play on the Xbox, so you’re left with playing games you can already play on a TV but on a VR headset.

Is VR Worth it for Xbox One X

I don’t think VR for Xbox one X is truly worth it because there actually isn’t any real VR headset that was made for the Xbox One X. Since there isn’t any VR headset made specifically for Xbox, there aren’t any games you can play on it that take advantage of VR worlds and their gameplay mechanics.

The workarounds are mere novelties, and they don’t serve any real purpose apart from playing games on a VR headset for the sake of doing it. A lot of VR headsets are costly, and buying one to play on an Xbox one system that doesn’t take full advantage of VR headsets seems like a waste of money to me.

Overall, VR and Xbox One X don’t seem to be compatible with each other, and it may not be worth it to get a VR headset for your Xbox One X because there are no compatible games, and it seems like more of a hassle than it’s worth.

In my opinion, the workarounds are not worth the time and effort, especially when you can just plug and play with a regular TV. If there are no real benefits to playing Xbox games in VR, then why would anyone want to get a VR headset for their Xbox One X?

Let us know what you think in the comments below, and thanks for reading!

Image Gallery – Is There a VR Headset for Xbox One X?